The architect, Jean Nouvel, was invited by Dolce & Gabbana and the city of Milan to design the scenography for the photography exhibition, “Extreme Beauty in Vogue”.

By using a temporary architectural installation, he hoped to write a new chapter in the story ofMilan’s Palazzo della Ragione, a place long held to enshrine political liberation and secularism, within its geographical and political relationship to the nearby Duomo. The theme of the exhibition inspired him to create a paradoxical scenography, one that was respectful yet tinged with humour in relation to the contemporary cult of beauty and the image.

The scenography was also a way of spotlighting fresh traces and of disturbing, by re-energizing it, the accepted reading of the great hall of the Palzzo della Ragione. The exhibition’s immersive environment simulated a sleeping world that had already been lying there for a long time, but had only just been rediscovered, marked as it was by wear and tear and the passage of time. The lights flickered, the colours were dark and indeterminate; there were traces on the ground of laurel leaves, smells of incense, spices and wax, evoking past mysterious ceremonials.

The system for exhibiting the 89 photographs included a huge unit purpose-built over two levels along the palazzo’s central axis where, they say, bookcases used to stand a few centuries ago. At ground level, the system was composed of a series of niches allowing solitary and respectful contemplation of each work, the dimension of each recess being in proportion to the dimension of the photograph it housed. Each work stood alone, propped on an easel in a small apse draped in dark velvet. Drawn into this private and special relationship with each work, the visitor was invited to meditate and gather his thoughts.

On the periphery, the words “Gloria Venustati”, or “Glory to Beauty”, were furtively projected, overlaying the traces of the frescoes that run along the side walls, and new “stained-glass windows” paid homage to the great portraitists of the history of art, adding to the spatio-temporal confusion. Huge velvet drapes hung down from the interior walls and spread over sumptuous sofas. The visitor was immersed in a dream.

For the opening night, Jean Nouvel blocked off the Piazza dei Mercanti and staged a show there: a transparent make-shift “cloister” was set up as a way of organising the reception and access to the exhibition hall. Thanks to the images screened over them, the façade and loggia of the Palazzo were also invested with a new story. The projection equipment and cameras transformed the square into one vast studio where the “dream creatures” of the beauty world moved around performing. 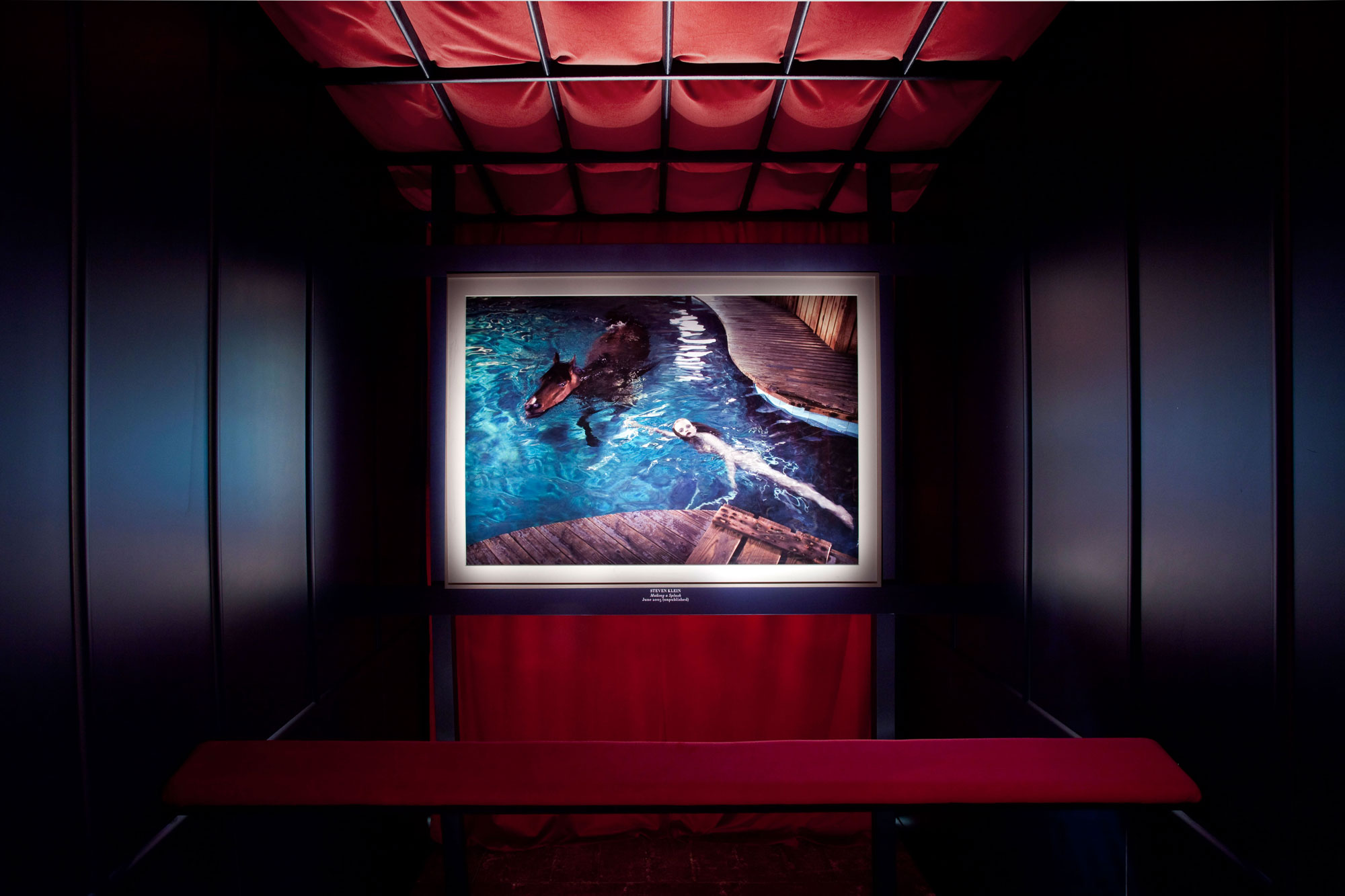 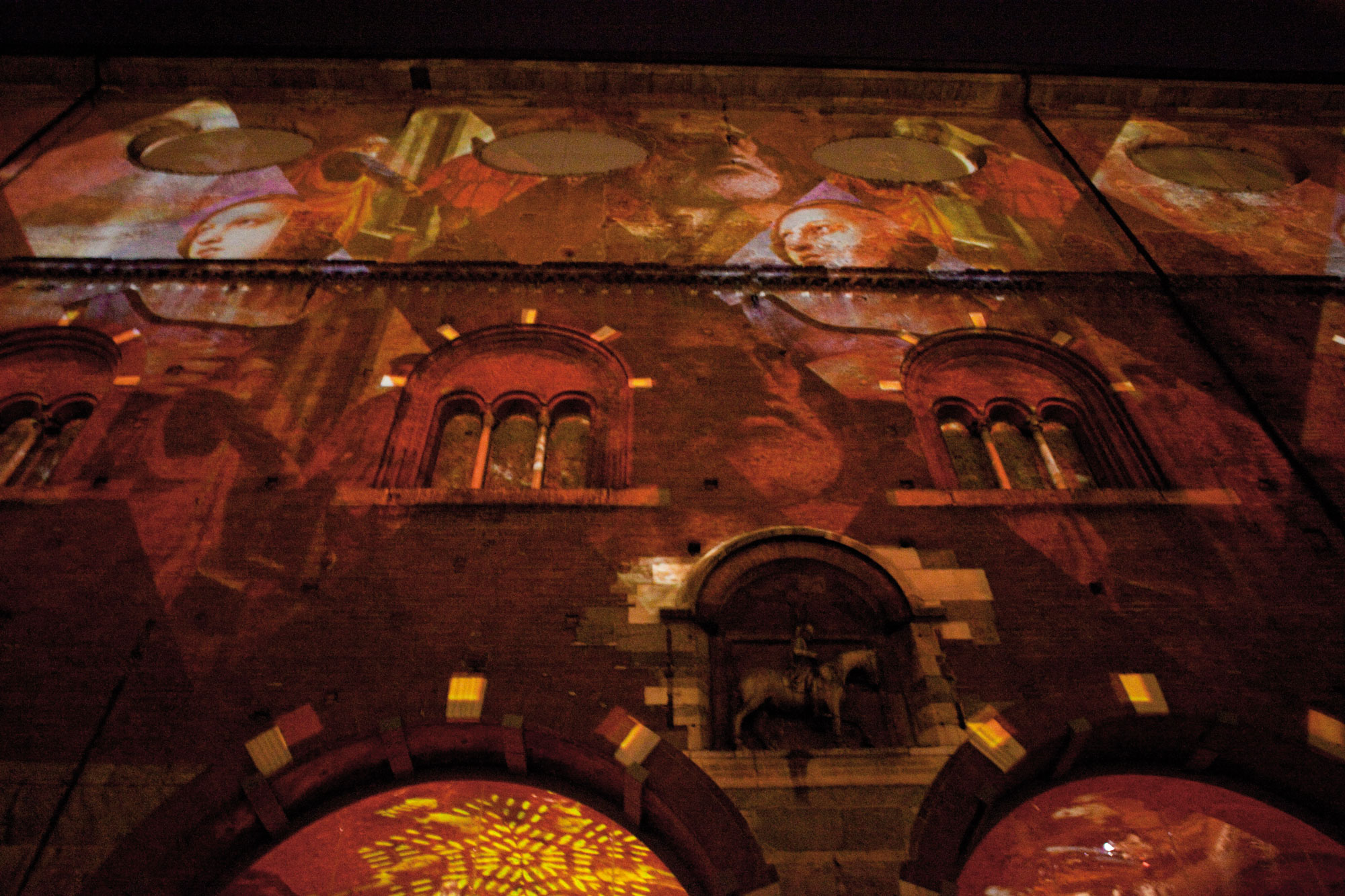 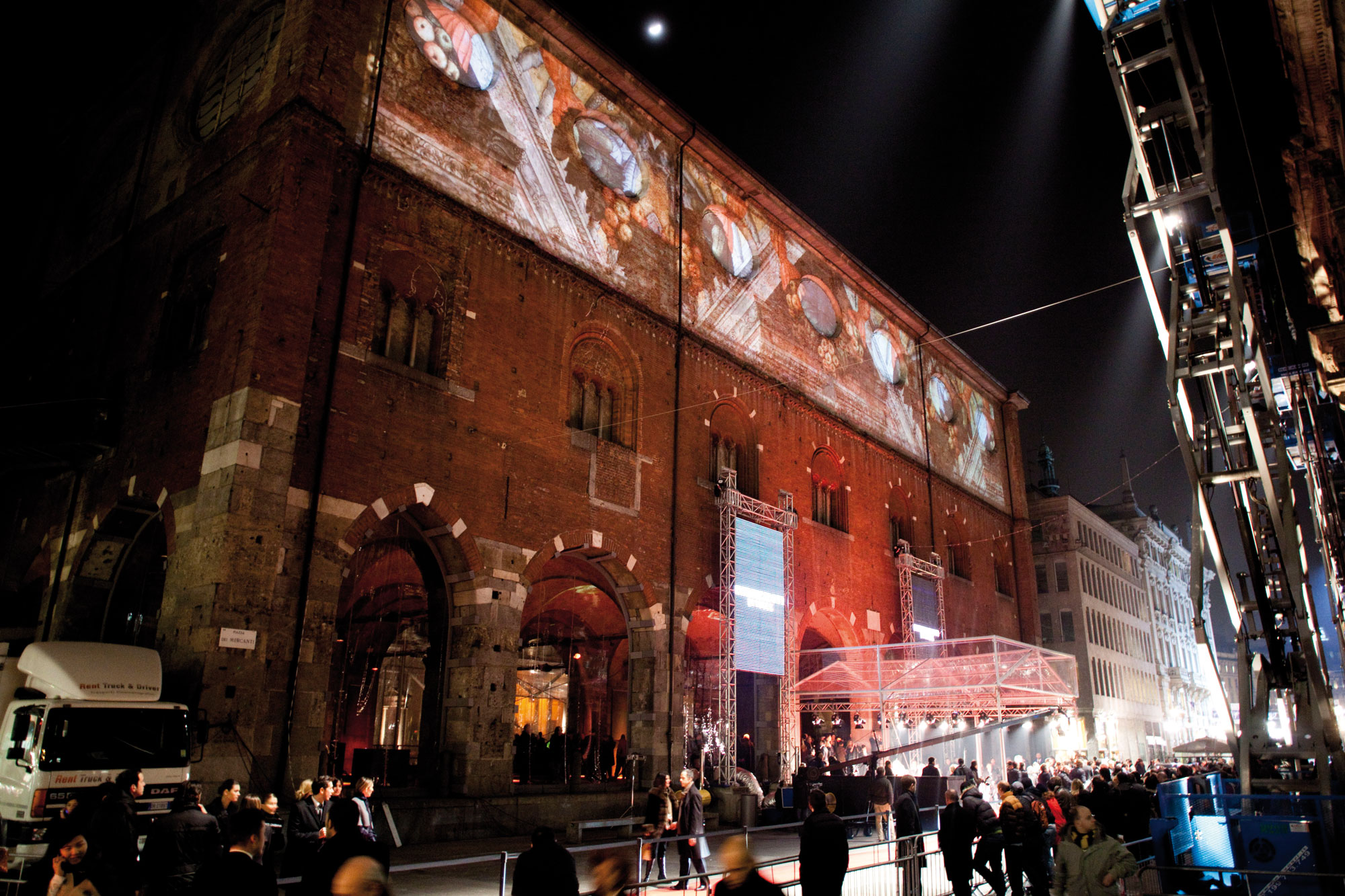 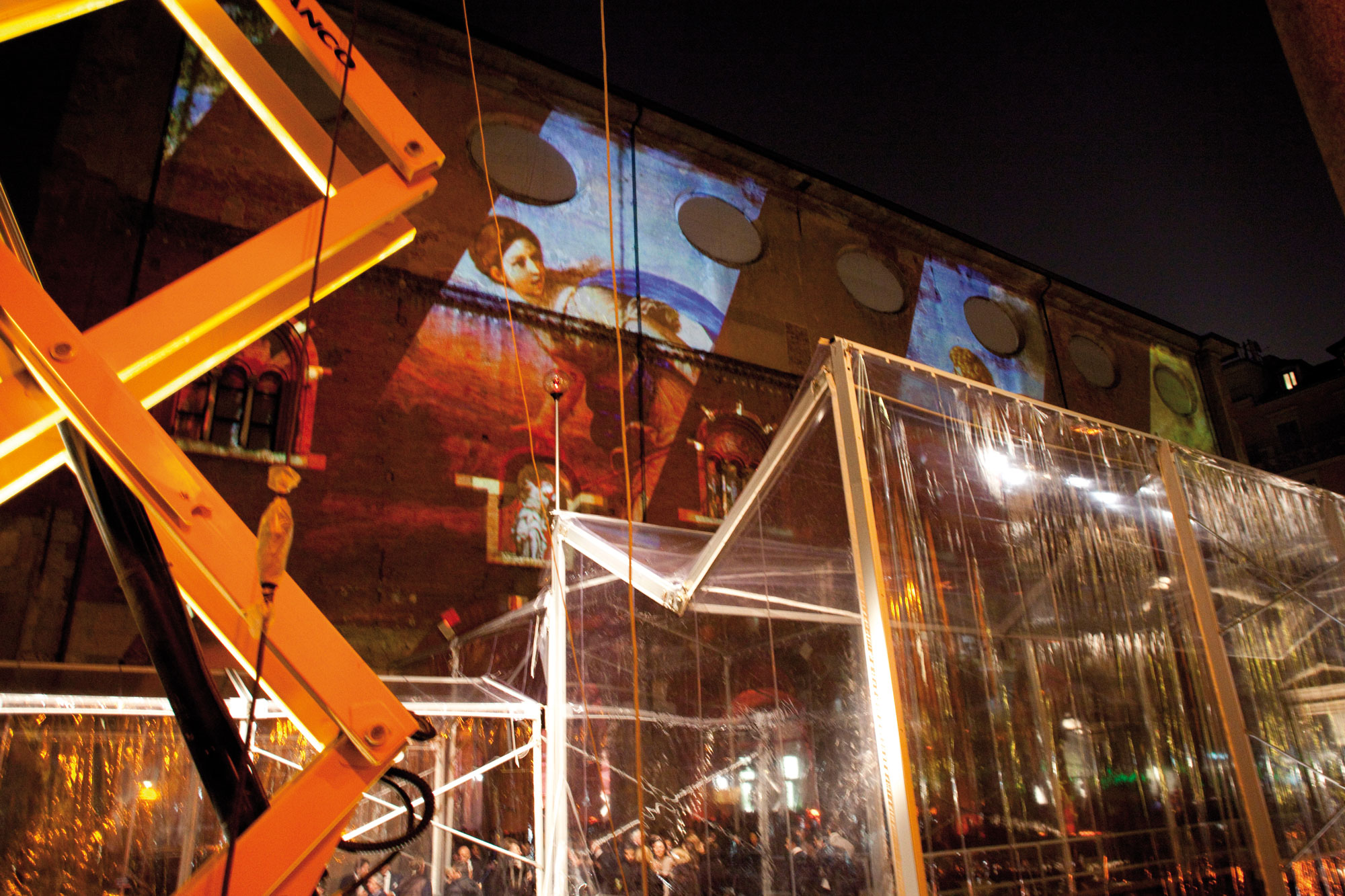 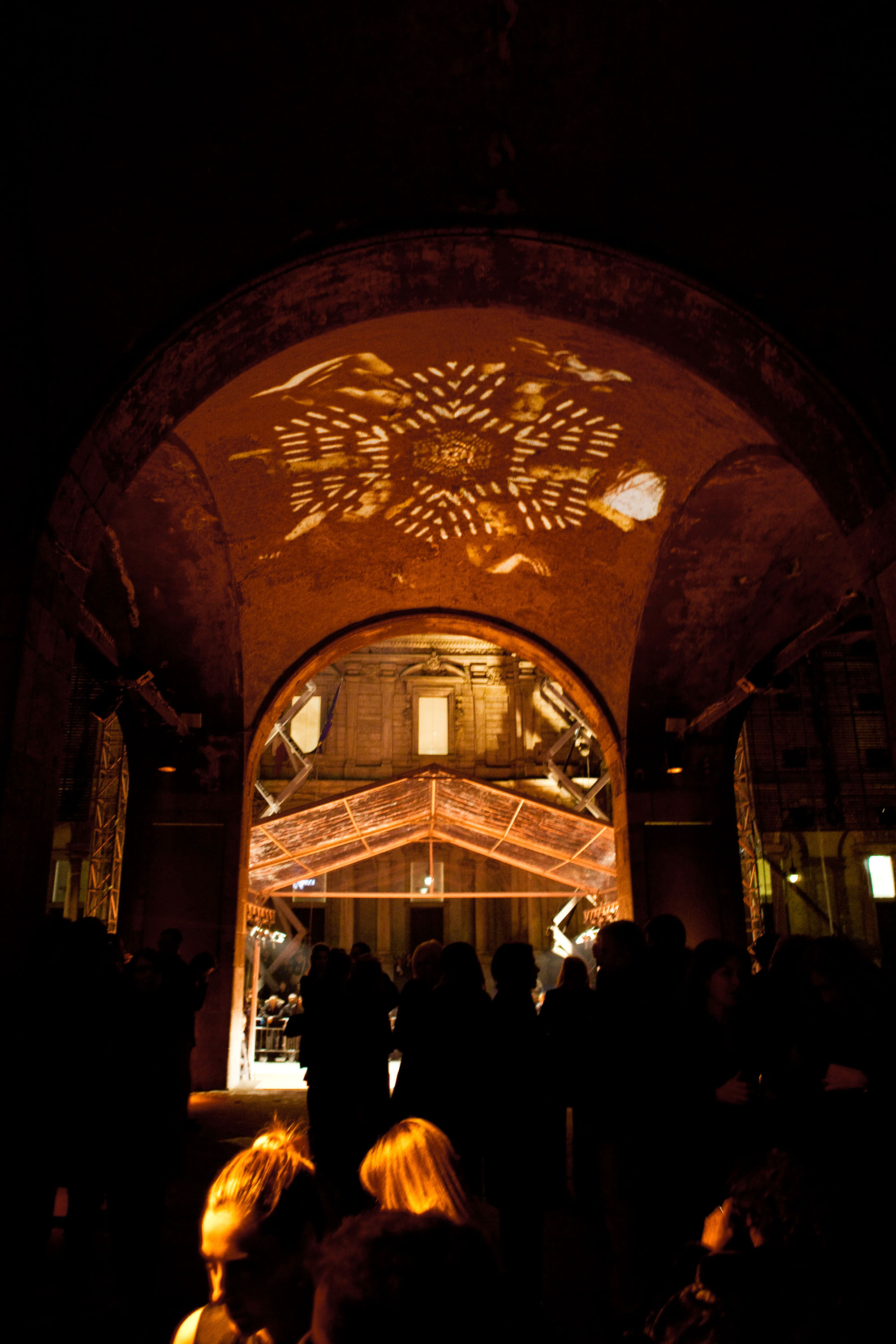 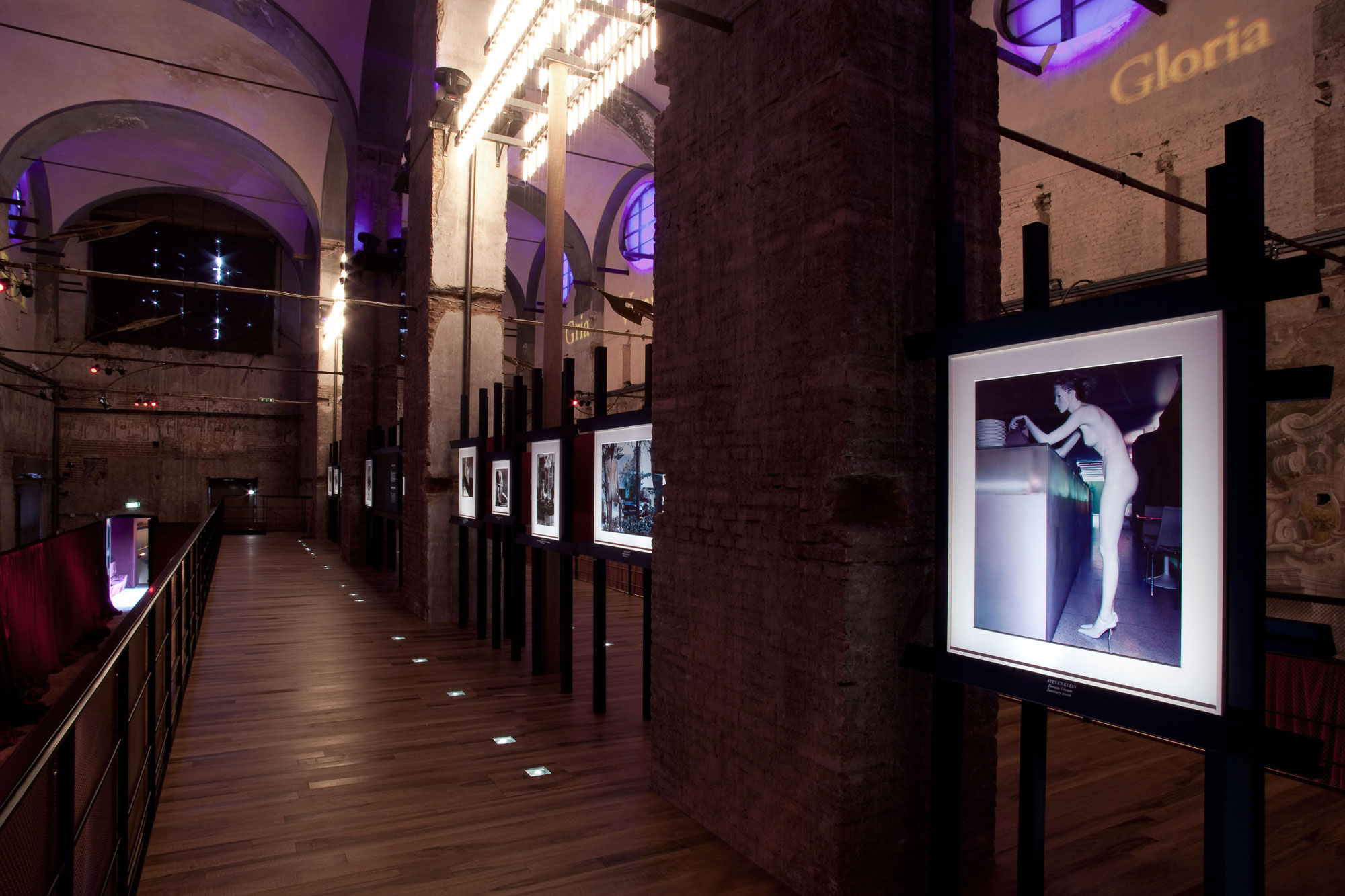 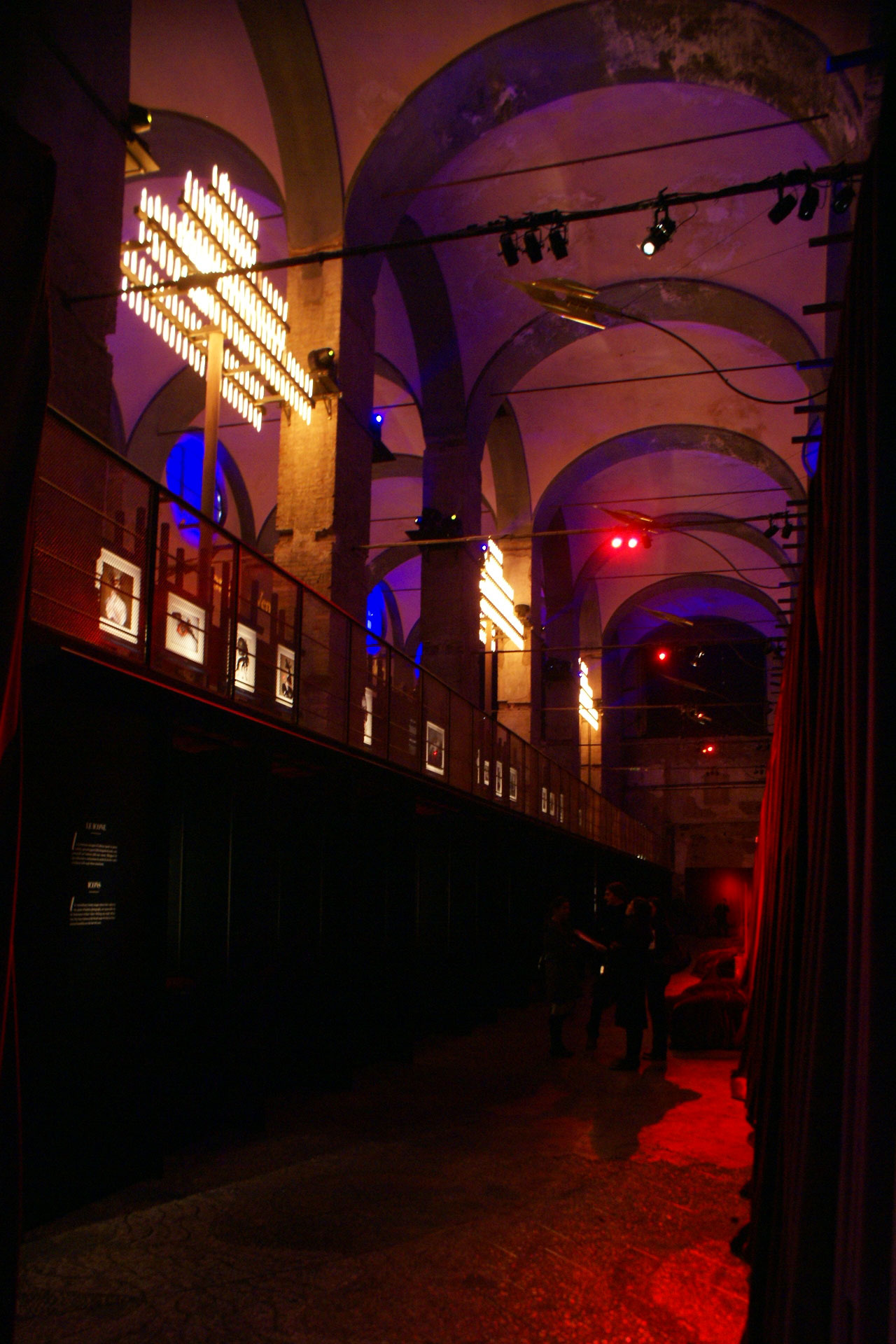 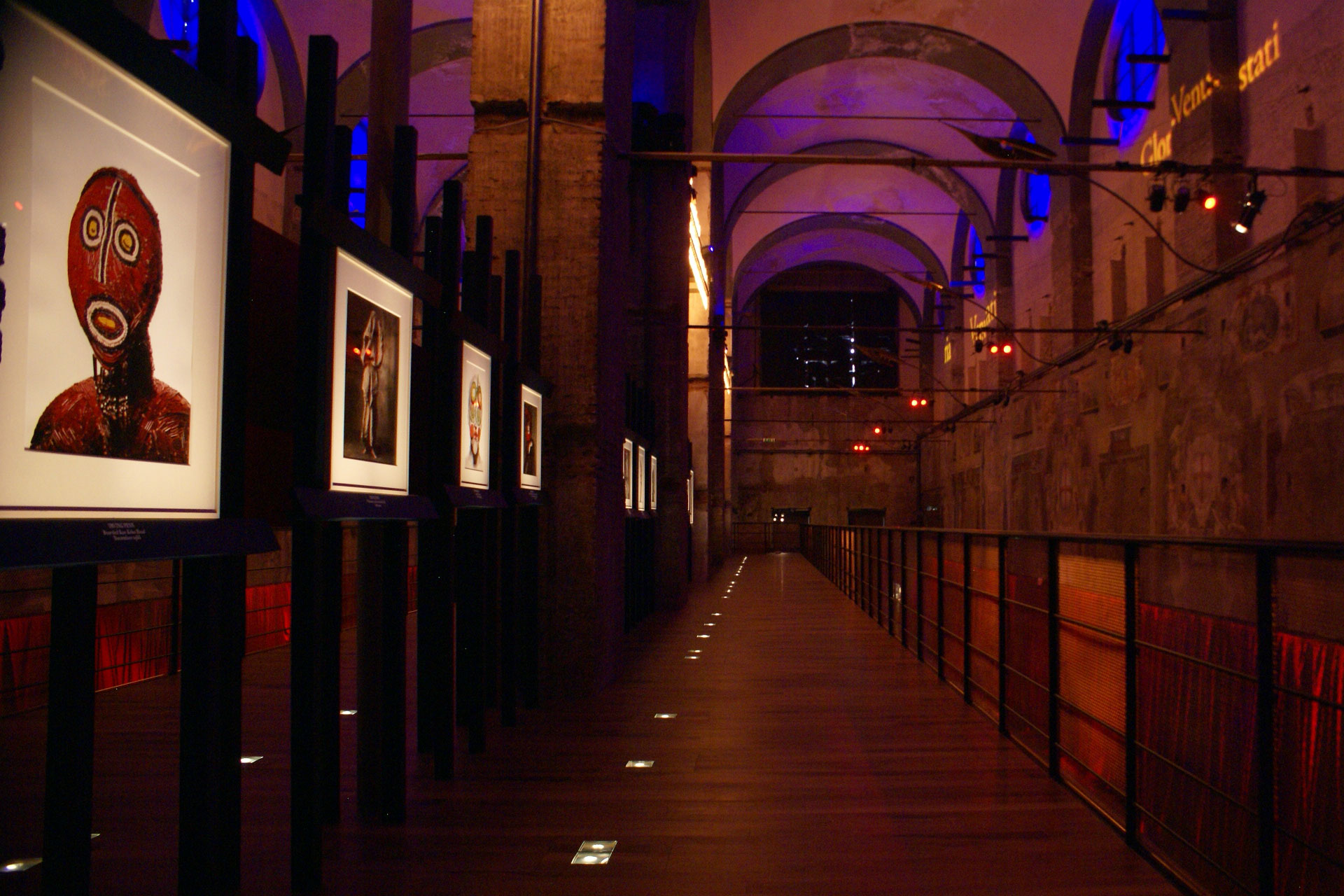 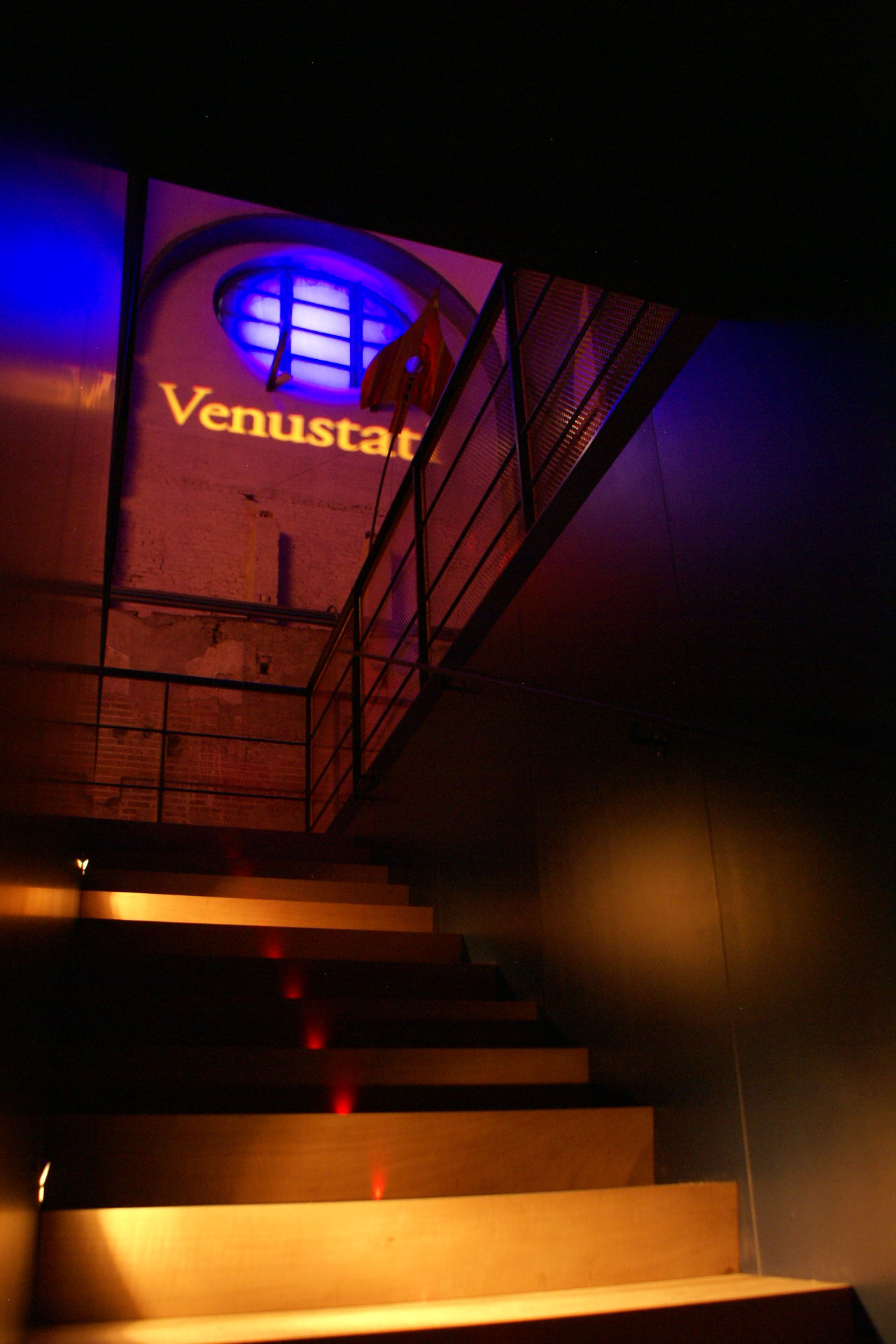 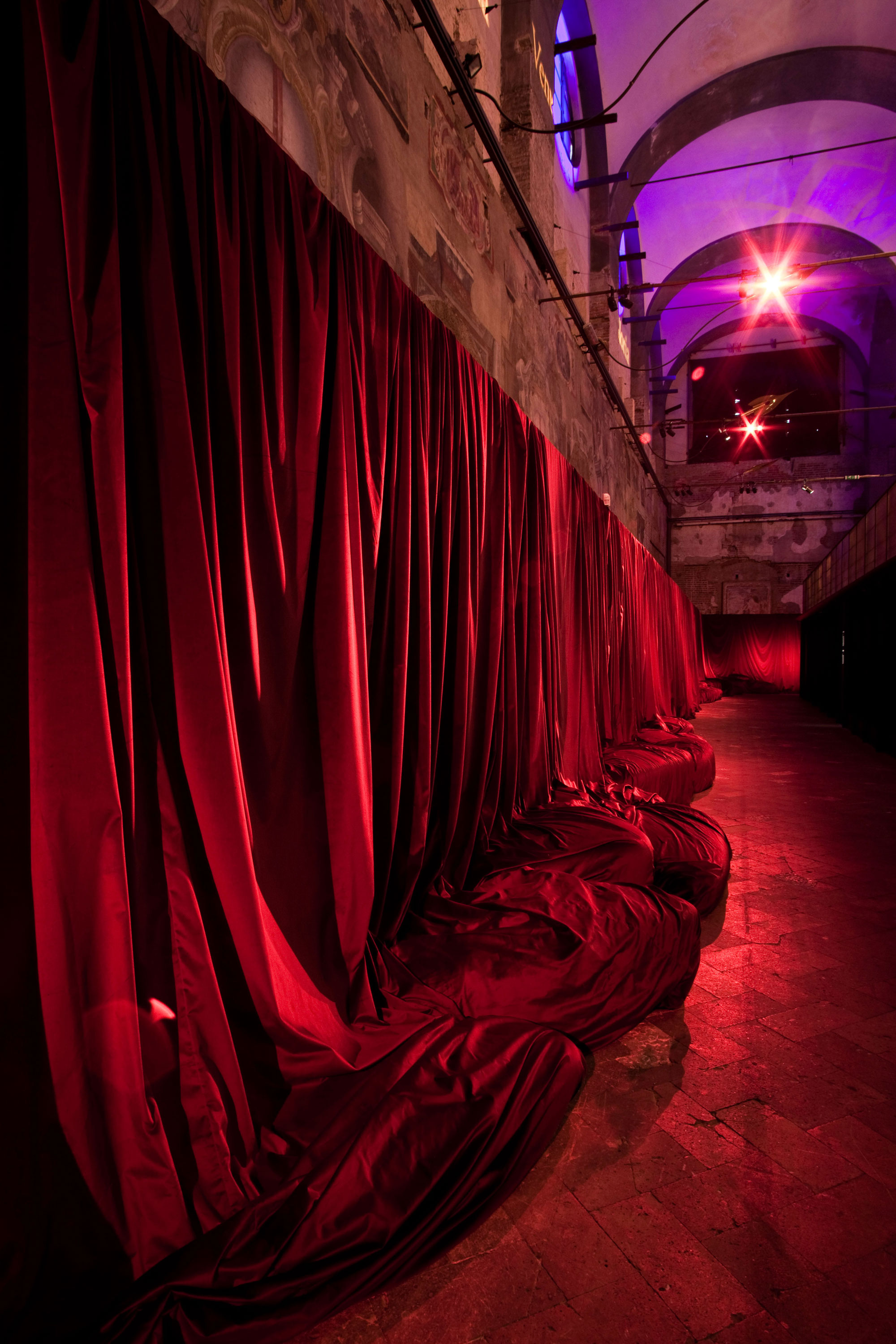 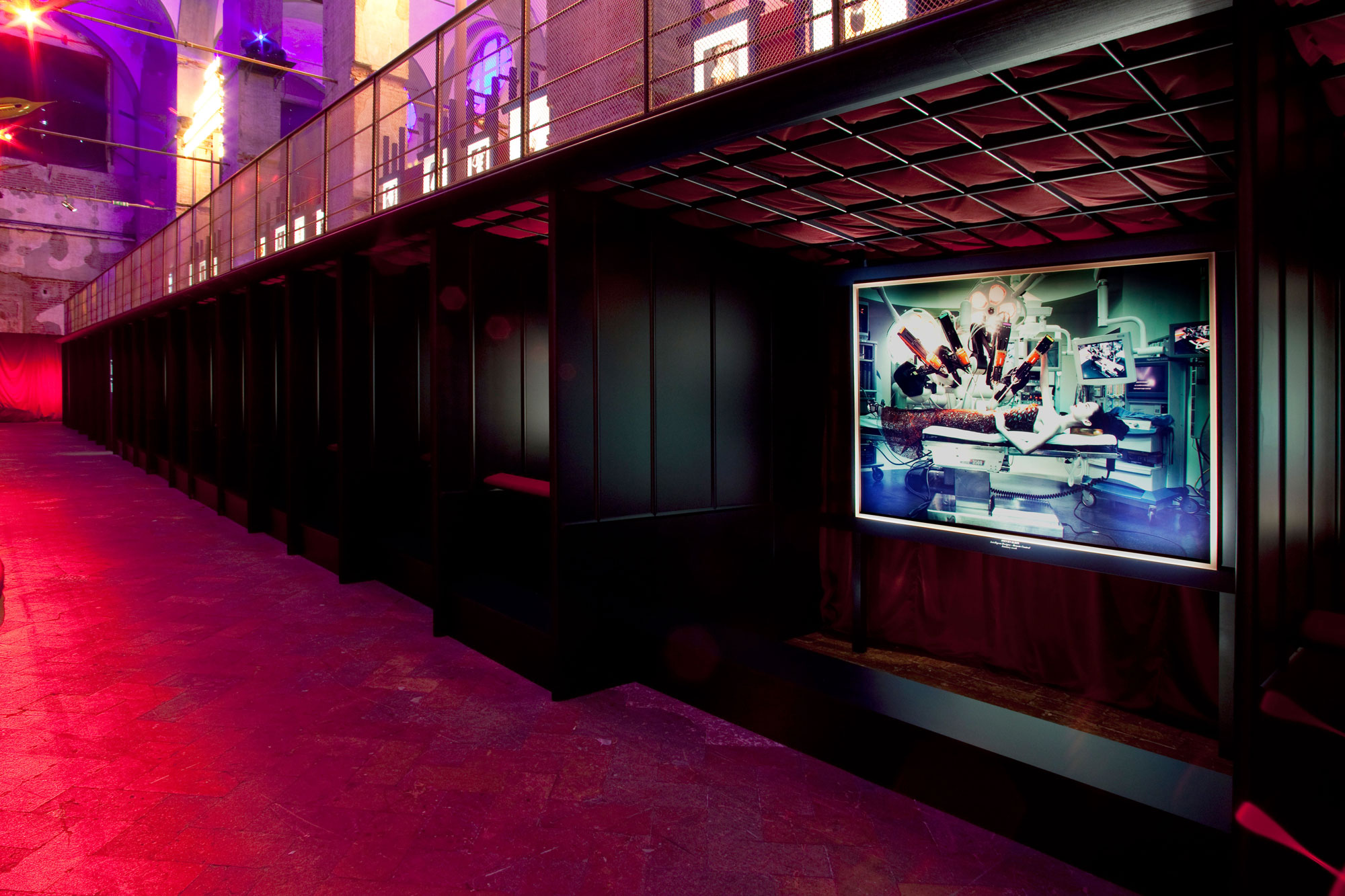 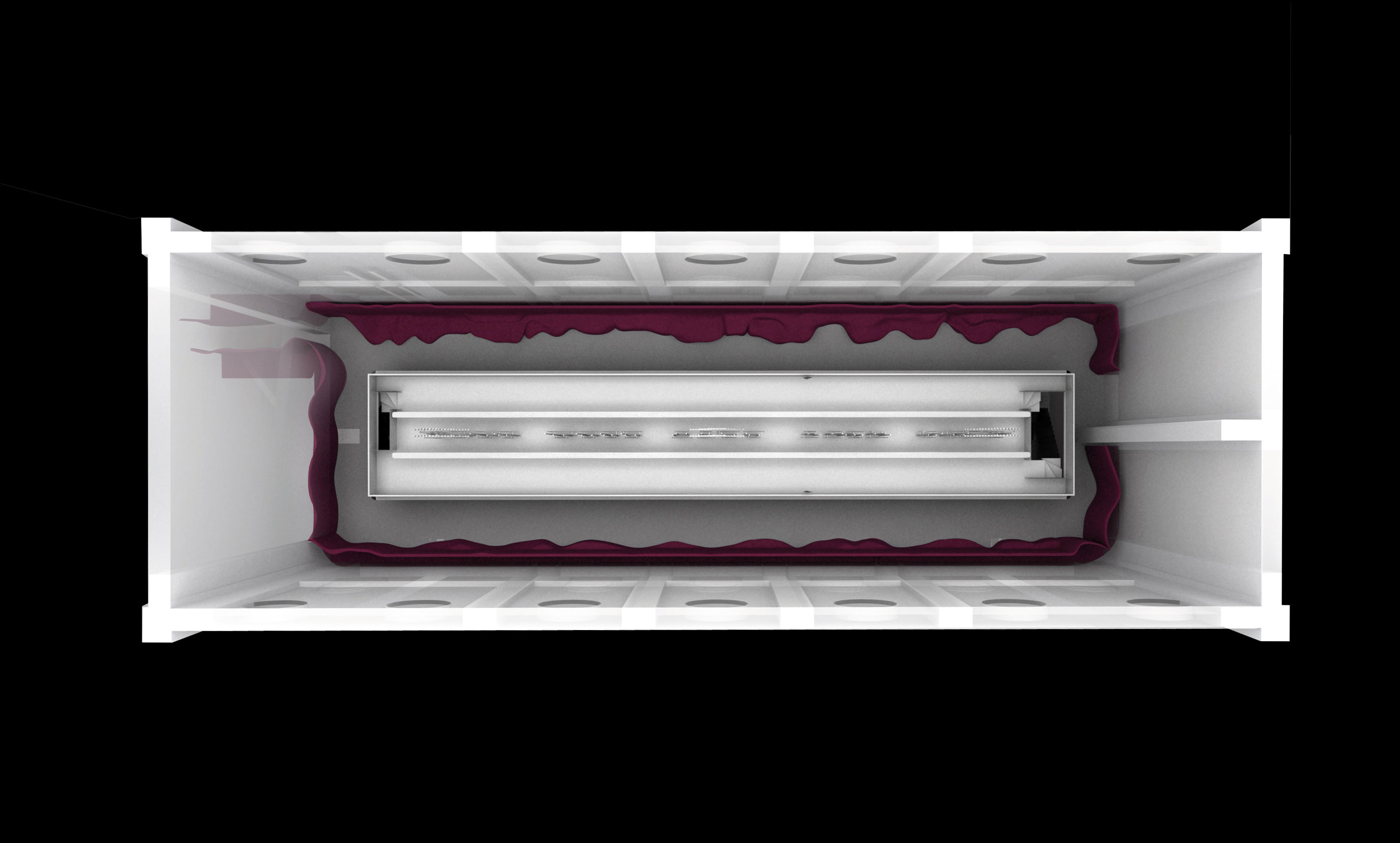